In this brief analysis of Venus and the ancient Fertility Goddess we suggest that in spite of their close association they are two different things. The defining representation of each is impossible. 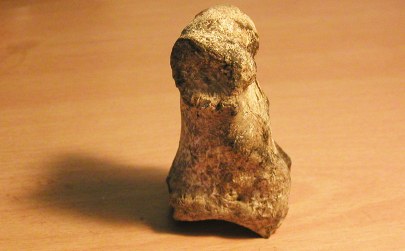 We can only create images which somehow point to the definition.
We use this idea to suggest that archaic Venus statuettes use abstraction as a means of symbolising Fertility more unequivocably. Later classical, figurative, representations necessarily fail in such an objective and have to opt for Venus’ beauty as a substitute.

There is a distinction to be noted but often forgotten between the ancient Goddess Venus and the generic Ancient Fertility Goddess (commonly and confusingly remembered through so called Venus statuettes). It is difficult to pinpoint this difference accurately: We have to control notions of morality and physical attraction before we can split the difference between eroticism and reproduction.

By dispassionately examining this grey area we may glimpse at early man’s notion of Fertility and hence glimpse at what the ancient Goddess of Fertility really meant to the everyday man: A notion which is Platonic (idealistic) in every way.

Unfortunately, the instant you draw your idea on paper it is no longer idealistic and hence it is gone. A step on from “look but don’t touch”: this is a case of “dream but don’t look”, or Venus will grab you. Perhaps the only real hope is abstraction in order to convey the Fertility message without triggering the Venus response. So what are these two messages about?

Venus is about the Power of Beauty

The Venus we are used to is a figurative representation of beauty, she is generally accompanied by “Love”. She herself is not Love and perhaps she isn’t Fertility either.

When we refer to Venus we certainly don’t consider her to be “ugly” or unatractive. That is because Venus is an expression of the enormous power of beauty, which in itself is a fundamental tool, a wheapon, by which “nature” (sorry if I remain vague in its definition) encourages reproduction and creation of new beings. ie Female beauty and Fertility go hand in hand but they are by no means the same thing. Fertility is neither beautiful nor ugly, it simply “is”. It is a fundamental necessity of life. Beauty enables nature to have her way through Fertility.

The most confusing ingredient of this beauty-fertility mix is the female waist-to-hip ratio. The suggestion is that a low ratio is common to all Venuses throughout the history of art and that this low ratio is a common indication of health, youthfulness and reproductive capability. How could you get more mechanical than that? So Venus, in all her beauty, attracts us by saying “I’m fertile”. So how can we separate the two notions?

Venus is a symbol of perfect human beauty – another Platonic abstraction quite different from that of “Fertility” but equally impossible to define through figurative art. We can only suggest and hint in order to get closer and closer but will we ever see a painting of the perfect beauty?

Fertility, on the other hand, is that quasi-mechanical quality which enables reproduction, although quite clearly it has strong spiritual connotations as does Creation: so intimately intertwined with spirituality and life itself. We could conclude that Venus is terrain and mundane: a dressing for something far deeper and spiritual:Creation.

So to worship “Fertility” per se is not a worship of beauty – it is more a worship of those qualities which enable the basic elements of (pro)creation and survival. Beauty and other mechanisms which encouraged and engender the act of insemination have already done their bit or perhaps were not present at all. They aren’t a necessary component of Fertility. What’s more, the glorification of beauty is a luxury you can afford only once you’ve covered the essentials of survival: A companion to procreate with, food to eat and a home for shelter.

The Fertility goddess covers two of these aspects: Food (harvest) and Procreation (descendants). We can therefore logically conclude that Fertility is more fundamental to man’s survival than beauty. Leading us to suggest that the Fertility Goddess was an element of everyday life well before Venus was born from the froth of the sea.

Given that Fertility is more elemental, less terrain, it is not surprising that its representation in the archaic periods of mankind are so often abstractions. The need to remove these representations from physical, external, beauty necessarily pushes their representation towards stylisation. The features associated with health, abundance and reproduction are exagerated whilst those associated with immediate physical beauty and attraction are toned down or even eliminated altogether.

The history of western art has followed the opposite track: make them into one, after all why make art to depict something devoid of beauty? Beautiful Venus makes more palatable art than Fertility. In a sense this implies that classical notions of art made the representation of Fertility a very difficult target to achieve, and lets face it, you could hardly worship the substitute: a cornucopia (horn of plenty). A beautiful woman holding this horn of plenty is a bad substitute too, as it falls back in the trap of using Venus’ beauty as a vehicle.

]So let’s try to use what we learned above to define and actually create a notion of “Fertility” which, if we wished, we might worship.

Idea:We could say that the difference of representation of fertility vs beauty is similar to that of drawing a stylised flower vs. the Platonic image of perfect flowers conjured by Romantic poetry. (I’ll get onto flowers and bees soon)

The flower shown left is a “symbol” of flower, a symbol of fertility and beauty without actually displaying the beauty per se. The fertility concept of the flower is laid bare and coveyed to almost anyone more so than if we were to provide a (beautifully) detailed botanical watercolour. The childish manner in which it is drawn makes it both innocent and functional in purpose. If we were bees which chance to fly by we would hardly be encouraged to stop because this flower symbol describes, rather than actually becoming a flower of fertility.

The flower of beauty, the Venus of the plant world, is more usefuly described by the Romantic poet Keats: “….where the deer’s swift leap startles the wild bee in the Foxglove bell…”. In this verse the beauty of Venus perfectly clothes what is essentially natural mechanics: bees and flowers. Through poetry Keats creates the Platonic ideal of beauty within our minds.

We have thus gained a first, blurred, glimpse of the difference between Venus and the ancient Fertility Goddess. One is beauty whilst the other is raw reproductive abstraction.

Similarly, our representation of the Goddess of Fertility shouldn’t necessarily excite physical attraction in its viewers. It is a representation rather than an effort to actually “be”.

Dealing with human form is of course a little more complex than dealing with a flower, essentially because we are instantly personally involved in a human-human recognition situation. To this we have to superimpose a differentiation of perception between men and women who might look differently on the same representation of the fertility concept.

Nonetheless, elimination of features of photographic reality, an essentially static rendering of the image and the elimination of recognisable features in the face, go some way towards removing this figurine, shown right, from day-to-day representation of a naked or nude woman (as Clarke would put it). It is therefore placed a little closer to the realm of the Platonic concept of “Fertility”.

The fertility figurine shown cheats a little: the childish representation, the “sexy” waist to hip ratio and the slightly bashful inclined posture continue to exercise a degree of human emotional appeal. So how about this below as a step further:

Here we have used the same knuckle bone shown in the ancient fertility goddess photograph as source for a basic line drawing. To execute the drawing relatively unrefined artist’s tools were used: computer mouse & MS paint. Admittedly line quality was employed as a pictorial device in order to render the image more successfully, hopefully without affecting the substance of the message.

So, using our earlier intuition we have introduced a degree of abstraction to boil down to something which is closer to a fertility symbol, devoid of that Venus menace.

It is left to the reader to decide on the degree to which this image is a  clear symbol of “fertility” worthy of worship as a concept: With little effort a charred knuckle bone is quickly transformed into an composite image of human reproductive qualities.

Is this bone really a Fertility Goddess figurine? In order to break away from beauty and get closer to the representation of pure fertility we have had to limit representation to a mere whisper of reality, just like early man.