Bellona was goddess of war – as in the latin word “Bellum”. Her temple was situated at the forum Boarium.

Pliny NH 35.3 tells us that Appius Claudius consul in the year 253 auc “was the first to dedicate shields in honour of his own family in a sacred or public place. For he placed representations of his ancestors in the Temple of Bellona, and desired that they might be erected in an elevated spot, so as to be seen…”. These images were known as “imagines clipeatae”. 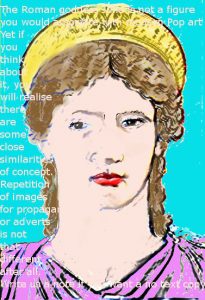 In fact, Appius Claudius, with the support of the mercantile sectors of society, poured funds and resources into the development of the whole Forum Boarium as Rome’s principal trading area, by the river Tiber and as such in need of infrastructure such as port, roads, temples and public buildings.

Amongst these he had the temple to the goddess Bellona built: a representation of Rome’s concept of war. The temple had a column the “columna bellica” erected in front which acted as a focal centre for military rituals and events.

It is not surprising that at about the same time as war and conquest were becoming a fundamental feature of Roman mentality, so a number of temples were dedicated to Victory: Bellona became Bellona victrix, Iuppiter Victor, Venus Victrix, Hercules became Hercules Victor.