By the time of Horace and Emperor Augustus religious ceremony had become more of a practice to be kept up with rigor coming before actual personal belief.

Wealth and the literacy of Greece together with theatre had done much to reshape Roman minds so that the gods became increasingly like other beings with whom bargains could be struck, rather like one could strike mercantile contracts at the forum.

The attitude towards the gods was somewhat different to the attitude we might have nowadays. Whilst religion today is a personal issue in those days it wasn’t at all. What was important was that ceremony and ritual had been duly kept to so that the gods in question should be kept happy towards you.

Astrology and other types of Mysticism were also followed with keen interest and in fact were deeply intertwined with the gods themselves. As an example, Emperor Augustus had his own extremely propitious star signs published for all to see and he even had his own tomb built, subdivided and oriented according to his birth stars!

We quickly come to see how “Religion” in ancient Rome wasn’t the relationship between an individual and his god(s) as we might expect nowadays. Rather, it was a miscellany of Spirits, Genii, Gods, Priests, Seers or Augurs, Mysticism and a number of other elements to boot which had to be kept happy through appropriate rituals. The individual would do well to ensure the proper rites were performed on pain of personal punishment (from the gods) although he himself didn’t necessarily have to undertake them.

Not surprisingly the gradual multiplication of gods and their temples achieved a progressive dilution of their significance and importance. An interesting anecdote is of the intellectual emperor-architect Hadrian (117-138) who designed and built the largest temple in Rome: the temple to “Venus and Rome”. “Rome” in this case is the city-goddess incarnate (or not). This was a double temple with gigantic statues of the two goddesses sat back to back. 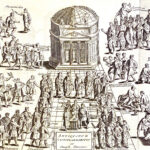 The story goes that Hadrian spoke of his plans with the great architect Apollodorus who replied, rashly, that if one of the goddesses were to stand up she would knock a hole in the roof. Apollodorus didn’t last long after that, the temple is still there in part thanks to its conversion into a church during the Middle Ages. I guess Apollodorus might have regarded his demise as a result of his insolence to Rome!

Thinking of the Middle Ages and multitudes of Gods I cynically compare the ancient Roman’s habit of going to this or that god according to requirement to the later Roman Catholics who turned to this or that saint (to intercede with God) according to the particular situation. This was particularly the case during the Middle Ages and came to be one of the fundamental problems underlying the Catholic/Protestant reformation movement.

The modern Italian writer-philosopher Luciano de Crescenzo wittingly writes in his book “Cosi’ Parlo’ Bellavista” how this is often seen in the Naples of today. Such was the case also at the time when the Roman empire had essentially christianised. This happened to coincide with that period largely considered as the decline and fall of the Roman empire (or at least the western portion of it).