Christians against the Circus

Christians against the Circus

We do know, for example, that the likes of St. Peter were martyred by Nero and that this was supposed to have occurred “inter duem metam”. Given that the “metae” were the pyramidal posts at the two ends of the Circus track there are several interpretations as to where the Saint was actually crucified (apart from being upside down).

We do know, for example, that the likes of St. Peter were martyred by Nero and that this was supposed to have occurred “inter duem metam”. Given that the “metae” were the pyramidal posts at the two ends of the Circus track there are several interpretations as to where the Saint was actually crucified (apart from being upside down). Spina of the Circus Maximus in Rome with the Meta at each end Possibly between the two metae in the Circus Maximus or possibly on the Vatican Hill which seems to have been a frequent site for crucifixion, or indeed between two Pyramids which were in Rome at the time. Crucifixion was a death generally reserved for slaves and persons not of Roman Citizenship. Caligula’s circus, sometimes known as Nero’s circus (see map section) was on the Vatican and it is said that St. Peter’s church is built over the site of the martyr’s crucifixion.

Emperor Claudius’ amphitheatre or roman colosseumA Roman citizen, such as Saint Paul for example, would have been beheaded in a degree of privacy. All this points to the notion that although Christian persecution and execution did indeed occur they were by no means exclusive to the Amphitheatre, the Colosseum and its shows. 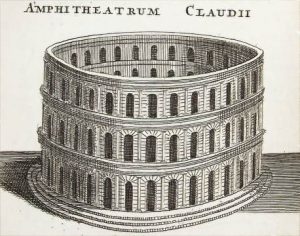 Referring back to my proposed reason behind the games, what did bring Christians into the Amphitheatre was their borderline situation with respect to the rest of their countrymen: the games were violent displays using non-Romans and anything anti-Roman to celebrate them as a counterpoise to “Romanity”. The Christians in their unambiguous following for one Lord, Jesus Christ, were consequently incapable of following the true Roman citizen’s reverence to the Emperor-Divinity and as such could be considered as anti-Roman Roman citizens, ie traitors.

Certainly the Christians and their new view of morality actively and publicly contrasted the games at the Colosseum. In one such event a monk broke into the arena to proclaim his disgust and was duly stoned to death by the crowd. It is possible that events such as these forced the end of the games around the fifth century (404AD) during the reign of Emperor Honorius although games with beasts went on for a further century.

During the Middle Ages the Christians converted the Colosseum to a sort of martyrdom memorial even though now there is doubt over the actual existence of a number of the Christians who were supposedly martyred there and subsequently raised to saintly status. Quite recently a number of these were actually eliminated from the official Roman Catholic Church listings of Saints.

The Colosseum was increasingly used as a stage for a number of religious displays which with the passing of time were supplemented with increasingly profane exhibitions. All shows were eventually abolished during the Renaissance. The cross which still stands in the Colosseum dates back to the 18th century.

Read more about christian persecution in the Roman empire.