The Tiber river playes a significant role within the geological formation of the region as well as within the social and economic development of the cities which developed there, Rome being the most successful.

The Geology of Rome

From a geological point of view, the area on the north side of Rome between the Tiber and Aniene rivers has been heavily characterized by the volcanic activity of the nearby Sabatine and Alban hills. This is particularly predominant in the two fronts which define the perimeter of the Tiber valley, formed on the North-West and South-East of where the city stands.

The chain of hills running to the North-West of Rome is some 10km long and lies parallel to the right shore of the Tiber. The mechanics of it’s formation are relatively complex, essentially involving three effects:

The left hand shore of the Tiber is also accompanied by a range of hills, also including the famous “seven hills” of Rome. These are made of volcanic tufa rock (soft and porous) produced by the volcanoes in the Alban hills and are cut through into tight valleys by intricate fluvial activity.

There is a broad alluvial plane on the North West of the city, crossed by the Tiber and Aniene rivers. It was formed as a result of a sudden 60m rise in sea level some 10,000 years ago (Holocene period) which transported and deposited a variety of silicate materials and rock fragments hence forming “clastic” sedimentary rocks ie largely quartz, feldspar, rock fragments, clay and mica as well as other minerals eg as might have been eroded from the volcanic activity.

We can therefore see how the rivers which cross this plain have been a fundamental element in further shaping the region.

Details of the Tiber river:

The original name of the Tiber river was Albula symbolised by a semi-clad bearded divinity lying on his side.

Course of the River Tiber:

The total length of the Tiber river is 396kilometers (246miles). The source of the Tiber is mount Fumaiolo in the northern Apennines on the border between Tuscany and Emilia-Romagna regions at an elevation of 1268m asl. It is actually made of two springs some 10m from one another.

When the Tiber reaches the first populated area ( Pieve Santo Stefano) it is still a relatively modest mountain stream, from here it enters the Tiberina Valley and gathers volume as it touches Tuscan towns such as San Sepolcro (near Arezzo and most famous for the renaissance paintings of Piero della Francesca). It then crosses the Umbria region from north to south, running near cities such as Perugia and Todi. By the time it reaches Orvieto it has definitely become a river. At this point the course of the river changes direction towards Rome, it crosses the city and then divides into two parts, one of these running past Ostia Antica and becomes the major mouth of the river into the Mediterranean sea, in fact the Tyrrhenian sea. The other, minor, branch is navigable; it goes past the village of Fiumicino (where Rome airport is situated) and into the sea.

Along its course the Tiber river has 5 major tributaries of the River Tiber, of which the major one is the Aniene river. 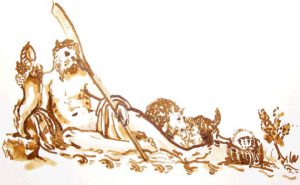 The average height of the river is 524m asl with the highest peaks on mount Velino and mount Vettore on the Apennines (2487m asl and 2478m asl respectively). The collection basin is 17.156 sqkm which receives an average 1030mm of rain per annum and includes a number of small lakes, mostly of volcanic origin, such as lake Trasimeno and lake Albano.

Image of the Tiber river holding a cornucopia (bounty) and providing safety and cover to the two twins,Romulus and Remus.