The Romans were certainly very keen on their astrology and something like a Temple-Planetarium could have worked wonders for your propaganda. As wacky as the idea may seem to us it certainly wasn’t new in ancient Rome.

For example, Augustus had used Egyptian astronomers to design the sun dial which cast just the right shadow over his altar to peace (the Ara Pacis) at the time and date of his birth on the 23rd September. Recent studies suggest Augustus’ family tomb was also designed and oriented according to his birth signs and in fact we also know that Augustus was so proud of his stars that he had them published for all to see. So, connection of heavenly and earthly powers on a monumental scale aimed at political advantage was not a new idea.

So at the extreme the purpose of the Pantheon was as a temple-cum-planetarium made to bring the heavens down to earth and to trap their perfection within the building and cast a heavenly blessing on the Emperor’s earthly power. 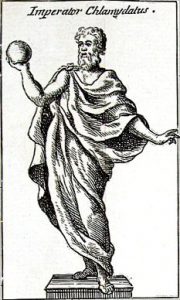 In opposition to the pyramids which had the function of bringing the Pharoahs up to the heavens, the Pantheon brings the heavens and divine inspiration down to earth. It is conceived along similar yet opposing lines to the pyramids. Rather than a triangle pointed towards the heavens this is a sphere with a hole at the top which captures heavenly light.

Image of a Roman Emperor holding the orb of power.Don’t forget that by this time it was standard practice to regard the Emperor as a living divinity, much along the lines of Oriental rulers. Like a crucible the Pantheon legitimizes the emperor’s power on earth by mixing it with heavenly and eternal cosmic order. The Orb held by the Emperor symbolizes his power over the world.

Surprise surprise the Pantheon was one of the few (three) places in Rome where the Emperor would sit on a public tribunal and as Princeps and Pontifex Maximus received petitions and pronounced judgement, issuing new laws governing the Empire. A good enough purpose for such a great building?

Going a step further, possibly into the improbable, heliocentric mystery religions were beginning to take a foothold. An example is Mithraism which in many elements was often confused with Christianity, Sol Invictu and Apollo (eg Mithras was born on the 25th December…). Discovery of the procession of the Equinoxes had begun to spin the idea that the stars weren’t necessarily fixed in their positions and what better explanation than an external mover, beyond the visible heavens.

And this is where I get my spin for a good novel: Eudoxus, a contemporary of Plato, many years before Hadrian, had suggested you could explain the often bizarre planetary motions by use of a series of spheres. He suggested 27 in fact. It wasn’t a perfect system but it did lead on to the concept of a spherical cosmos based on mathematical rules and a student of his went on to add a few more to make the system more accurate.

If we take the liberty of adding one to describe precession we get 28. Guess what? There are 28 coffers on each of the 5 rings of the dome. So perhaps by the time astronomers had developed a few centuries of improved mathematical models…. I envisage some contraption standing in the middle of the Pantheon, lining up with the suns rays in order to calibrate it with the aim of predicting the next total eclipse. Remember you read it here first, but now, back to reality.