This introduction to Social Class and Structure in Rome is by no means exhaustive but it does give a flavour of what the class structure was like in ancient Rome.

There were four main classes of person in Rome: the Aristocracy known as “Patricians”, the common folk known as “Plebeians”, the slaves and finally the free men who came into Rome to conduct business known as “Clients”. 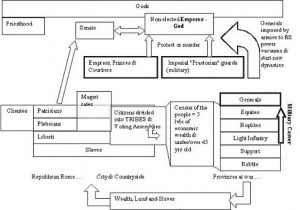 A fundamental element of Roman society was the clear distinction of position and roles between the different social classes, at least in the early days. This distinction was underlined in numerous ways, for example access to positions within the army, priesthood, public offices (cursus honorum), in roman clothing and even the seats you might be allowed to occupy at the circus and public games.

Not surprisingly the first century AD was not only accompanied by a new form of rule but also with shifting social balances. For example, increasing numbers of plebeans were making careers in the Roman army, liberti were winning increasing power and wealth and Roman women were gaining increasing independence. A particularly emblematic moment was during the reign of Nero when the emperor created and partly implemented a new model of rule and a new vision of Roman society which overturned traditional barriers, for example having upper class patricians and women exhibit themselves at the public exhibitions: something severely condemned by upper class contemporaries and later generations (for obvious reasons perhaps).

From the earliest beginnings of Rome the basic unit of Roman society was the family. Within the family units, the father was to all intents and purposes “owner” of his wife, children and slaves to the same extent that he owned his sword and other material possessions. The head of the family could do whatever he wished with the other members of his direct family, including selling them off as slaves or putting them to death. In the very beginning there were no laws to govern the rights of individuals within the family.

The families were grouped up into clans or “gens“. Each gens claimed a common ancestor and they came to make up the aristocracy of Rome. The head of each gens/clan was called “pater” (father) and all the members of these aristocratic families became known as “Patricians“.

Read more about the Patricians

The “plebs” were the vast majority of society and they constituted a social class made of the common folk. Generally speaking they were the descendants of people who had come to Rome after the Patrician families had founded it. Possibly they were descended from freed men or simple immigrants.

Read more about the Plebeians of Rome

Everyone knows what a slave is, and in the early days of Rome these persons were largely confined to working in the house. The lord of the house had the same rights over his slaves as he did over his wife and children. He could make a slave into a free man or sell one of his own family members into slavery.

It is generally a mistake to ignore the role of the slaves even if they had no free will or voting rights. Like any other “commodity good”, the price of slaves was related to their abundance. Times of conquest brought access to cheap slaves which in turn meant free, extremely cheap labour. This in turn had huge and direct effects on productivity, on the Roman economy and the welfare of the people, whatever their social class.

Slaves could perform all sorts of jobs and in many cases could be extremely well educated people. One could therefore find slaves working in the shops, banks and teaching in schools just as easily as they might be found tilling the land of some rich Patrician.

Read a lot more about slavery in ancient rome and how the slaves found their freedom.

“Libertus” was the social class of a freed slave. Though at first sight this might give the impression of someone doomed to a lowly existence there is plenty of evidence of liberti wielding great wealth and power. first and foremost amongst these were the liberti in the imperial household who practiced all types of office for the emperor and were often more highly trusted than the wealthy Patricians who might have a “misalignment” of interests with the emperor.

This situation provoked extreme tensions between the liberti and senatorial class which evidently felt that the liberti were wielding powers far above those earned through birth, wealth and social rank.

A particularly poignant insight into the extreme wealth and power which might be reached even by a libertus are to be had from Petronius Arbiter’s book “Satyricon” written at the time of Emperor Nero: the situation was clearly at one of the greatest extremes as would be expected of Roman satire, nonetheless the very fact that it was a subject worthy of writing about is sufficient to give a sense of the extremes which had been reached.

Persons who had come to Rome such as travelers, merchants and other foreigners, including freed slaves, were generaly known as Clients and effectively formed part of a separate social class.

In the early days only the Patricians had Roman citizenship. Clients wishing to do business in Rome required the support of a Patrician as personal patron. A solid Patrician-Client tie was thus formed. A patrician waking up in the morning would often start off his daily duties by meeting up with a group of his Clients who would have come to visit him at his home in order to ask for his favours and support in some matter. The Clients would return these favours according to their means, whether by working the Patrician’s land if they were poor, or by making generous gifts.

Social stigma and taxation laws meant that in later years wealthy Clients tended to be linked with banking and trade whilst the Patricians tended to be focused on land ownership. Through the personal networks of Clients, the Patricians could carry out trade which might otherwise be seen as personally humiliating.

Next page about the Roman hate for Tyrants and Kings