Walls were constructed through a number of different techniques which could range from clay packed around a wooden frame through to stone blocks and bricks held together by mortar. These techniques had different names such as Opus Mixtum, Opus Reticulatum or Opus Incertum.

The different techniques were used according to preference of the particular age, availability of materials, aesthetic result and of course structural function.
The image above shows an example of Opus Reticulatum. Click on the image for an enlargement and brief explanation. The image below on the other hand is an example of early Roman possibly Etruscan construction, utilizing large blocks, possibly as foundation for a building which would have largely been made of wood. The lack of mortar is evident.

roman_estruscan_wallsThe Romans knew of a number of different types of mortars and cements which they used according to their specific requirements and availability. For example a quick drying binding of pure chalk could be used for the stone blocks of aqueducts whilst a strong cement was used for the monolithic dome of the Pantheon. They also knew of the results they could achieve from lime mortar which on drying undergoes a chemical reaction which could be used to permanently fix colours for fresco painting. 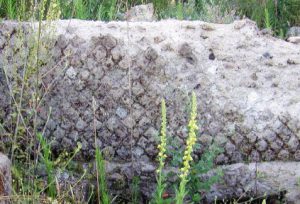 The availability of materials was obviously instrumental in the development of new techniques. For example, cement was made possible thanks to the discovery of Pozzolanic sand quarried from the volcanic deposits in the area of Pozzuoli, near Pompeii and Vesuvius.

A mortar filling type of binding wasn’t the only one to be used either. In particular situations the Romans, like the Greeks and other civilisations, were skilled in using dove-tailed metal bindings or keys to hold large stone blocks together. This would be particularly useful in situations where an absolute solidity might be required in order to prevent damage from small earthquakes or movement of the subsoil. Many of these metal bindings were taken and molten during the middle ages.