Ancient Roman-Etruscan foundationsFrom the earliest origins of Rome when the city was heavily influenced by its Etruscan neighbours, the foundations of Roman buildings and Roman houses were well understood to be fundamental to the long term survival of the building. 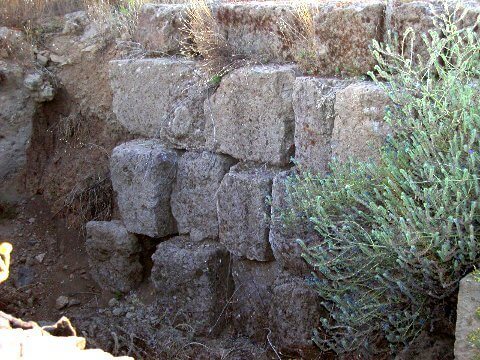 The image to the left is of Etruscan-Roman foundations at the city of Veii, not far from Rome itself. The blocks are about 50-70cm in length and height and made of tufa stone. Many foundations had stone blocks at least twice the size of these. It is interesting to note the way the blocks in the image tend to spread outward towards the bottom.

As a consequence of this importance and their desire to create longlasting structures the Romans sat their buildings on a compact subsoil preferably of rock which given the geography of ancient Rome tended to be of volcanic origin.


We might regard it surprising that often more material (stone) was used in the foundations under ground level than in the actual visible building. Foundations of 2 or 3m (6-9ft) depth would not be uncommon and the remains of buildings such as Hadrian’s temple in the piazza di pietra square in Rome provide an excellent idea of the size of the blocks and depth they might reach.

As an added technical feature the importance of damp proofing was also important so that in wetter countries of northern Europe the floor level might be held off the ground by standing the floorboards on short stone pillars in order to create an aeration chamber underneath. This chamber would have vents left open into the sides so as to allow any dampness to dry out.

The villas of the Rich, important public buildings and public baths would go a step further and would run hot air through the under-floor chamber and pillars to provide heating into the living quarters above. This warm air could even be driven up the inside of walls through clay pipes, like mini-chimneys which eventually lead out through the roof.

Flooring was often made out of a wood structure and boards. The floor boards rested on cross beams which themselves rested onto supports built into the building’s supporting walls. An extra refinement to this was to cover the wooden floors with a packed straw layer and cover this with smooth mortar which could be brought to a high finish or even tiled. This allowed the floors, particularly on the upper floors to provide noise proofing as well as greater comfort.

Roofs, like floors, were made of a wooden structure of trusses which rested on supports built into the bearing walls. The outer surface of the roof would be tiled with relatively standard tiles very much like those used nowadays. In some cases special tiles might be used in order to allow smoke out of kitchen areas and such like.