Before the advent of Roman coins the purchase of goods at the market was governed by the exchange of metal by weight. Shop keepers and tradesmen would have scales with which they would weigh the buyer’s metal which had been given as payment for the goods. In the earliest days of Rome, ie from around […]

Before the advent of Roman coins the purchase of goods at the market was governed by the exchange of metal by weight. Shop keepers and tradesmen would have scales with which they would weigh the buyer’s metal which had been given as payment for the goods.

In the earliest days of Rome, ie from around the seventh century BC, this exchange metal was cast into rods of a standardised weight of ferrous copper alloy with a stylized branch stamped on them.

The first, relatively shapeless, Roman coins were issued around 330BC and were called the “Aes”. Four of these made a “Sestertius”, which is perhaps the most commonly known coin (also thanks to Asterix and Obelix I guess). The coin weighed some 330grams and like the earlier rods the value of the coin was directly related to its weight in metal. 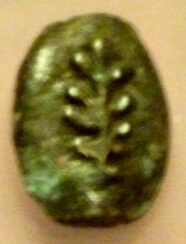 y the beginning of the imperial epoch (around the year 0, say) the Aes weighed approximately 30 grams: one tenth of the original. This is symptomatic of a general trend which would be manifest in the later ages also.

The first gold coins minted in volume were issued by Augustus around 16BC and weighed approximately 8 grams (8.18 to be precise). The gold used was that brought back by Julius Caesar from Gaul. To be strictly correct the earliest Roman gold coinage was minted during the Republican age as part of the war against Hannibal and Carthage. Hannibal attempted to win support against Rome by allowing his allied Italic populations to mint their own coinage. Rome responded with its first gold coins, the smallest of these weighed some 3.89 grams.

he decline of Roman coinage became manifest by 200AD, during the rule of emperor Caracalla. Truly gold coins were replaced by increasingly thin alloys of gold and silver were used instead. One of the last attempts at gold coinage was made by Emperor Macrianus (260-261AD) during one of the empire’s periods of greatest turmoil. Emperor Valerian Ist had been captured and publicly humiliated by the Persians and Macrianus succeeded him for only a year  before being killed in battle. Macrianus’ “aureus” weighed a feeble 4.47 grams.

Coins  were not only becoming lighter but also smaller, although there were temporary efforts made by various rulers at bringing them back to their former quality and size. By the time of emperor Constantius II (350AD) the basic bronze coins had reduced in size and weight to a puny 3.4 grams and 15mm diameter.

The barbarian Alaric, rubber stamped the fall of the Roman Empire of the West by invading Rome. However his coinage is testimony of the undying respect held even by barbarian invaders. Alaric continued to mint and issue “Roman” coinage although by this time was only a ghost of its former self. Alaric’s Roman coins were thin, lightweight and of valueless alloy, lacking in shape and definition but nonetheless they were stamped with the particularly poignant words “INVICTA ROMA”.

Read into further detail of Roman coins, the various types and reforms of Ancient Roman coinage.