The circus maximus in Rome was of ancient origins even by Roman standards. King Tarquinius Priscus held the first Ludi Magni dedicated to the Capitoline Jupiter in the Circus Maximus which he founded in the 7th century BC. As a mixture of religious feast, public gathering and free entertainment the Ancient Roman chariot races at the Circus Maximus were a manifestation of all that the Romans loved.

It is likely that the roots of the chariot races for which the Circus Maximus was designed lay in agricultural festivities involving races with horse and plough or horse drawn carts going round in circuits (“circum”). These were gradually developed to veritable light-weight racing machines with as many as 10 horses but usually with two, called the “biga“, or four, called the “quadriga“.

Suetonius suggests that emperor Domitian once held as many as a hundred races in a day although it is likely that he meant to refer to the chariots rather than 100 separate missus.

The last races of Rome were held almost a hundred years after the fall of the last Roman emperor Romulus Augustulus. After more than 1100 years of racing tradition an end was put to them during the reign of the invading barbarian chieftain Totila in the 6th century.


Architecture and Design of the Circus Maximus 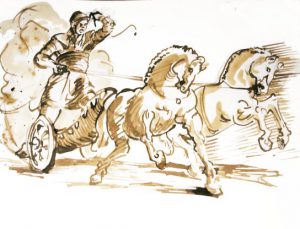 The first proper and henceforth greatest circus in Rome was the “Circus Maximus”. The circus was founded by King Tarquinius Priscus in the 7th Century BC. Its size was increased under successive rulers but at its greatest it measured some 2000ft in length and 450ft in width (650m x 125m). This made it fit snugly into the marshy Murcia valley between the Palatine and Aventine hills which king Tarquinius had specially drained for the job.

The shape of the whole building was like a stretched oval with a flat end called the “officium” which contained the starting blocks called “carceres” from which the chariots would enter the track when metal barriers were lifted. (Carcere in Italian now means prison).

The seats around the track were initially made of wood up the valley sides but these were subsequently replaced with stone seating. The Circus Maximus was rebuilt by Julius Caesar and the seating was increased to 150,000. It was then covered in marble by Trajan in the first century AD and the seating increased to the full 250,000. Trajan also rebuilt the imperial seat box called “pulvinar” into something resembling a temple. It was situated close to the finish line called “meta“.

Different accounts suggest that the Circus could seat as many as 250,000 spectators but tradition has it that on occasion it might reach as many as 375,000 spectators, which is possibly a bit of an overestimate. As in the Colosseum, the track was called the “arena” on account of the sand it was covered with. The racing track itself was 270ft wide (85m) and a number of aids would continuously sprinkle it with water during the races in order to keep the dust down, cool the wheels of the carts and improve the horses’ grip as they went round.

The elongated oval track was divided down the middle by a wall 6ft high, 20ft wide and 680ft long (2m x 6m x 214m) called the “spina” (backbone). The spina itself was decorated with obelisks which were symbols of the sun and immortality, pillars  and images of the gods such as Cybele and Neptune, god of the seas and horses.

The first of the obelisks of the Circus Maximus was placed there around the year 0 by emperor Augustus who had it brought over from Egypt. This obelisk now stands in the centre of the Piazza del Popolo in Rome. It is made of a red granite and is still very imposing as it stands 23.91m tall (approx 70ft), which with the pedestal and decoration on top make it reach 36.43m (about 120ft). It originally belonged to the Egyptian Pharaoh Ramses the II in the 13th Century BC.

A second obelisk was placed there four centuries later. It dates back to the 15th century BC and now stands by the basilica of San Giovanni in the Lateran (Rome). It is the tallest obelisk in Rome, reaching 45.7m (about 150ft) including pedestal and decoration. These two obelisks are the tallest still standing in Rome.

At each end of the spina there were the two “metae” which looked like a trio of tall ice-cream cones or space rockets marking the finish line. By each of the metae there would be a set of seven metal dolphins (in honour of Neptune) and a set of seven eggs. These would be taken down one at a time as the chariots lapped round the track.

There was an imposing arcaded front under which there would have been a variety of shops and services for the public ranging from fast food through to prostitutes and fortune tellers. Trajan’s coin also shows us the Spina with the two Metae at either end and a single obelisk in the middle, the one which had been brought from Egypt by Augustus and now stands in the Piazza del Popolo square in Rome.

It is difficult to decide which of the Circus Maximus and the Flavian Amphitheatre (Colosseum) would have been the most impressive building of the time .

The major Circus in Rome was clearly the Circus Maximus which could seat as many as 250,000 spectators, but other circuses also existed, including:


Hadrian’s circus was near his mausoleum which is now the castel Sant’ Angelo.