The Roman triumphal arch, of which the arch of Constantine is a notable and extremely well preserved example, was probably the most singularly Roman architectural innovation (no pun meant).

The arch of Constantine is situated in the valley between the Caelius and Palatine hills, just by the Colosseum, across the Via Triumfalis: the street down which military triumphs were conducted. It was erected in 312AD by the Senate and people of Rome in honour of Emperor Constantine’s victory over Maxentius.

As may be seen in the picture to the left the arch of Constantine is actually made up of three arches, like the arch of Septimius Severus in the nearby Forum. It’s overall facade is almost square: 25m x 25.7m). It is 7.4m deep. It faces North-South.

The four columns and the variety of coloured marbles give the arch a degree of aesthetic depth as well as overall harmony. This unity of overall effect is all the more striking when we realise that many of the decorative elements have been “lifted” from other monuments which predate Constantine and this becomes more evident through the stylistic differences which are readily aparent on close inspection of the reliefs and sculptures.

This collage approach was rendered necessary because many of the sculptural and artistic knowhow required for such a large-scale monument had been migrated across to the new capital of the empire, Constantinople (Istanbul). The collage approach may also be viewed as an attempt to recall Rome’s earlier power and glory.

The Sculptures and Reliefs on the Arch 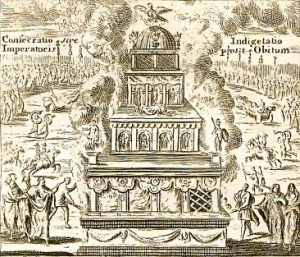 Rome apartments all the way to the Colosseum!

The four statues on either side of the arch represent Dacian prisoners (Dacia was a large portion of south-eastern Europe and comprised current Romania and more).

The square reliefs between the prisoner statues represent various scenes of the wars of Marcus Aurelius.

The large round medallions (four on each side) represent scenes of hunting (boars, lions and bears) and sacrifices to the gods (Apollo, Silvan, Diana and Hercules)

The rectangular reliefs just under the medallions (two either side of the arch) show scenes of Constantine’s enterprise against Maxentius – the siege of Verona, rallying the troops, battle at the Milvian bridge, handing out cash to the people.

Over the main arch we have representations of Victory with the four seasons.

Over the side arches we have river gods and allegorical figures.

At the base of the columns we have more personifications of Victory with barbarian prisoners.

On the sides of the arch we have square panels of battles against the Dacians, circular medallions (one each side) of sun and moon, the army setting off from Milan and the/a triumphal march.