Ancient Roman weapons were adapted and improved over the course of their civilisation which in the West lasted some 1500 years whilst in the East went on a thousand years longer (the Byzantine empire with its capital at Constantinople). 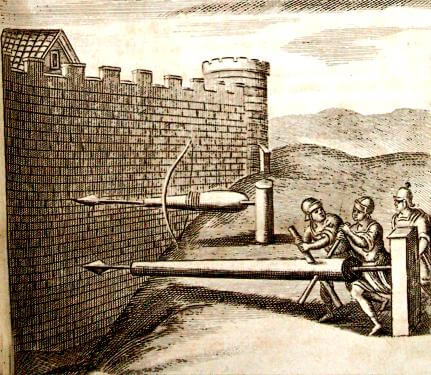 Their earliest weapons, during the period of the kingdom were essentially the same of other populations inhabiting central Italy, the Etruscans in particular. So much so that one of the most popularly remembered elements of Romanity and fighting – the Gladiator – owes its name to the gladius sword which was essentially an Etruscan weapon.

Various types of roman weapons are detailed separately. This paper goes on to look at the factors influencing the development of ancient Roman weapons and of war machines.

The ancient Romans were highly practical and although the general pace of ancient Roman inventions and technological development was generally “slow”, the needs of continuous war over a great variety of terrains placed a strong incentive to develop and refine areas of knowledge such as military tactics, weapon making, civil engineering, transport, logistics and of course Roman medicine.


gladiatorsThe practical sense I have alluded to, combined with the direct access to a large variety of resources (such as the metal quarries taken from the Etruscans) allowed the Romans to be quick to adopt new ideas from their enemies or those who they conquered and easily adapt them to their own needs.

A brilliant example of this is the “crow” on the prow of ships: Early Rome spent much of its time fighting wars on land to gain dominance of Italy and it wasn’t until their influence spread to the southern tip of the peninsula that they began to contemplate the usefulness of the grain supplies from Sicily and northern Africa, which of course placed them in direct contrast with a power of equal might, the Carthaginians, giving rise to the Punic wars and fight generals such as Hannibal.

The Carthaginians had already gained mastery of shipbuilding and naval strategy but it didn’t take the Romans long to capture a Carthaginian ship which had run aground, copy its construction ad a sort of contraption like a large claw on a hinge to the front which essentially allowed their own ship to bind itself to the enemy and for their own foot soldiers to board the enemy. Roman ships thus revolutionised naval war-fair and turned their own strength in hand to hand combat into a winning advantage in spite of their lack of experience at sea.

rostrum from an ancient Roman shipTheir pride in such an enterprise was recorded for ever more with the “rostra”: the public speaking podium in the Roman Forum was decorated with the prows of the enemy ships they had taken.

This is just an example of course but similar practical genius was applied to all spheres of weapon making and warfare. It also went as far as not bothering to train their own men in new types of combat or weaponry – why bother when you could create a manipulus of this or the other race who were already highly trained and experience in just that!

Roman war machinery is also greatly renowned. Much of it was copied from peoples such as the Greeks and later improved to the nth degree so as to increase their fire power as well as to reduce the time within which they could be constructed.

roman war machine – a boltThe ability of Roman military engineers to construct such machines and structures from scratch using whatever materials might be present locally is well recorded. An example of their ability is the speed with which Julius Caesar’s troops were able to build a Roman bridge over the river Rhine. An ability which was so astounding as to often catch their enemies by surprise to devastating effect.

This same ability could be seen in other aspects of military campaigns for example, the building of roads in order to enable the troops to move swiftly over conquered lands. These roads would be constructed using the materials closest to hand in order to speed up the building process, meaning that the technique used to build the roads would also have to be adapted acordingly. Another example of their military engineerig capability in construction of war equipment and support materials is to be found in the construction of military camps which could become veritable villages – prefabricated so as to be packed and unpacked in the shortest of times