When we think of ancient Roman villas our minds tend to ramble amongst ideas of luxury and palatial buildings, possibly in cities such as Rome or even Pompeii though Pompeii was actually a relatively provincial town. Perhaps the right idea is to be had from some of those Roman paintings within some houses of Pompeii which depict the luxurious villas on the coast: the very same ones which writers such as Pliny the elder and Pliny the younger retired to frequently on the coast south of Rome and towards the bay of Naples.

Little of the greatest luxury Roman villas remains, perhaps the most notable are those built by various emperors, like that of Emperor Hadrian at Tivoli or the scant remains of those built by Emperor Tiberius on the island of Capri.

However, when the Romans spoke of villas or “villae” the thought could just as easily refer to large estates and farms in the countryside which were intended more as a source of income for their owners than of leisure.

The Villae Rusticae – the farms of ancient Rome could reach extremely sophisticated levels of organisation so as to intensively manage large areas of land through the use of slave labour. Such concerns on average included some 200-250 hectares of land 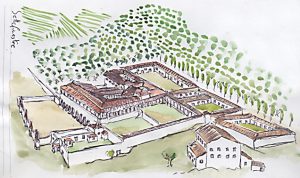 [/imgBigt]The successful management of such estates required extremely solid competences which the Romans also put down in famous agronomy texts some of which have made it down to us:  Columella, Cato’s “De Agricultura” and Varro’s “De Re Rustica” are but a couple of examples which contained very explicit recommedations regarding setting up and running your farm. The perfect example of villa rustica was to be found in Varro’s villa perfecta (I, 194)

The last two together composed the farm proper, known as Pars Massaricia.

A feel for the level of sofistication may be had from Varro bk3 De Rustica regarding animal farming:

“This matter of herding has a twofold division, as the feeding around the steading is one thing, and that on the land is another. The latter is well known and highly esteemed, being also called pecuaria, and wealthy men frequently have ranches devoted to it, which they have either leased or bought”

The farm would clearly be geared to the type of production involved, even within wine making it is possible to subdivide the produce according to one of three types of trade:

Managing the farm clearly required the right level of skill and investment to generate the desired produce particularly when enormous estates such as that found at Settefinestre were involved (see image).