The location of Rome, protected amongst hills on the banks of the river Tiber, not far from its mouth to the Mediterranean Sea is a defining element of Rome’s naval and commercial strength based on the might of the ancient Roman ships.

The location of Rome, protected amongst hills on the banks of the river Tiber, not far from its mouth to the Mediterranean Sea is a defining element of Rome’s naval and commercial strength based on the might of the ancient Roman ships. The enormous strategic importance of Rome’s local geography was recognized by men such as Cicero who admitted that Romulus and the gods themselves would have found it difficult to make a better choice of location.

Representation of the Tiber river as a deity protecting the city of RomeAt that time of ancient Rome, the river Tiber was navigable. As far back as the 7th century BC the marshes on the river’s left bank, near the Tiber island, were partly drained (to build the Circus Maximus) and partly dug out – to build the fist major Tiber port and the Forum Boarium: the cattle market. In later years the river would be lined with a multitude of parking bays (“Navalia”) some of which are still partly visible today.

The Romans soon realised the river’s strategic importance for their own welfare: as far back as 508 BC the city had been subjected to a siege and naval blockade which the Romans managed to break with small boats of supplies sailing on a moonless night.

The city’s growing need for food supplies and later domination of Etruscan mines and agriculture meant increasing contact with mercantile trade across the sea. This clearly meant a growing need for ships of the best quality. As Roman sea trade grew so did the cases of piracy and hence the need to protect shipping routes.

Ancient Roman interest in ships, particularly from a military point of view, began to take off in a big way around the beginning of the 3rd century BC as their dominion moved further south and came into contrast with cities whose wealth was based on sea trade and naval strength, such as Anzio towards Naples.

Ancient Roman ships were really a copy and improvement upon those of their Italic allies, the Etruscans, Greeks and Carthaginians who dominated sea routes before Roman expansion into the Mediterranean.

Once Rome’s dominion had stretched to the southern tip of the Italian peninsula the Etruscans and Greeks were hardly a threat to Rome’s power but war with Carthage was inevitable. A few treaties were attempted but the need to ensure food supplies through Sicily as well as the lure of commercial trade with the Orient were too much for Rome to disregard.

Carthaginian dominion of the Mediterranean trade routes was based on their naval power which was clearly superior to that of Rome. In 311 BC the Romans created a naval committee to look after the future navy. Ships were supplied by Rome’s allies and the Roman navy counted some 20 ships in total, all of which were “triremes”. Not many!

Naval battle against the powerful Carthaginian navy required no more no less than large “quinquiremes” with some 25-30 oars on each side and five men per oar. No-one constructed ships of that size in Italy.

As luck would have it, a Carthaginian quinquireme ran aground as it tried to blockade the Romans who were trying to ferry across to Sicily in borrowed boats. Once caught, this enemy ship is supposed to have provided the Romans with the prototype they needed. In about a year the Romans sported 100 quinquiremes alongside the 20 triremes. We must assume that some 30,000 peasants and labourers were sat at benches and quickly trained up as rowers before being sent out to sea.

rostrum from an ancient Roman shipAs was to be expected the Roman lack of experience in ship construction meant that the ancient Roman ships were relatively heavy and unwieldy. This meant they would be less suited to the standard practice of punching holes into enemy ships by quick manoeuvering of the heavy spikes (rostrum) fixed at the prow of the ship.

The practical minded Romans made sure this didn’t matter too much: they knew that their advantage lay in hand to hand combat so all they required was for the ships to get them into a one-to-one situation. Surprise surprise, Rome’s innovation was to add an adaptation of something they had seen on Greek ships: a drawbridge with a spike so that they could close in and lock on to the enemy, hence eliminating the messing around with prelude of naval manoeuverings and getting straight into the proper fisticuffs they were so good at.

The only disadvantage of the drawbridge idea was that it tended to make the ship less stable in heavy seas, but you can’t have everything. To cut a long story short Roman domination of the seas was established when the Romans beat the Carthaginians in what was possibly the largest naval battle of antiquity: The Romans crossed the Mediterranean with 230 war ships and 100 transport ships driven by some 100,000 oarsmen carrying 40,000 soldiers. The Carthaginians counter-attacked with 250 war ships and 150,000 oarsmen. The Romans had the better of them and from then on the Mediterranean was destined to become “a Roman lake”, in spite of a terrifying storm at sea which managed to sink as many as 280 roman ships and almost 100,000 men in a splash.

Ancient Roman love for public games and feasts meant that festivities involving ancient Roman ships and naval battles were not forgotten. There are many accounts of large scale naval battles called Naumachiae which were enacted inside an appropriately filled amphitheatre such as the Colosseum.

Emperor Claudius remained famous for an enormous battle complete with ancient Roman war ships which he staged in the lake at Alba Fucens before having it drained; 20,000 convicts participated whilst praetorian guards made sure nobody got to shore or threatened the spectators’ safety. 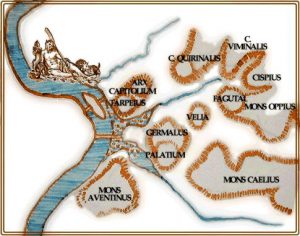 according to use – it’s hardly surprising really: a war ship would tend to require manoeuverability whilst a merchant ship would need the space to carry as much cargo as possible.

A roman quinquireme shipRoman quinquiremes tended to be flat-bottomed whilst the merchant ships tended to have deep V-shaped hulls which allowed the oval shaped amphoras to be stacked more easily. Being the centre of the Empire, at least until the time of Emperor Diocletian, meant that Rome’s ports up the Tiber and in particular the port of Ostia at the Tiber’s mouth, would regularly receive all kinds of goods not only from all parts of the Roman world but also from much further afield.

A law was passed in 218 BC forbidding Senators or their sons from owning ships capable of carrying more than 300 amphorae. Apart from the reasons for which such a law might have been passed the importance of this action lies in the way in which it underlines the distinction between the senatorial class and others. This law also consolidated the tradition by which patricians and senators didn’t dirty their hands with commerce but rather focused their wealth on land ownership and farming.