The Ancient Roman Pantheon is probably one of the best preserved buildings of ancient Rome and it is still in use. Like the Colosseum and Constantine’s Triumphal Arch, the Roman Pantheon has an inherent utilitarian and architectural perfection about it which have certainly had much to do with its survival through the ages.

As the inscription under the pediment tells us, the building was erected by Marcus Agrippa who was Emperor Augustus‘ right-hand man, general, and son in law and dates it to around 27BC.

Agrippa had the temple built as part of a wide-scale urban planning project aimed at developing the area by the Tiber still known as the Campo Marzio (the field of Mars) which in antiquity was used as a military training ground. Agrippa chose the spot which was traditionally regarded as being the place where the founder of Rome, Romulus, had been picked up by an eagle-Jupiter to be taken to sit amongst the gods.

However, relatively recent investigations of brick stamps have lead archeologists to discover that the temple was rebuilt by Emperor Domitian around 80AD after it had burnt down. Some 30 years later it either burnt or collapsed after it was struck by lightning and was rebuilt around 120AD by the humanist-architect Emperor Hadrian.

Agrippa’s building was more conventional as temples went and was accessed from the opposite end to the one used now. The Pantheon’s purpose was to glorify the ruling Julio-Claudian dynasty founded by Julius Caesar, now under the rule of Julius’ adoptive son Augustus Caesar (properly known as Octavian). It is said that Augustus refused to be revered as a god but rather preferred the temple be dedicated to “all the gods” of the planets, primary amongst which were the protectors of the dynasty: Mars and Venus. Hence the name “pan-theon”. Augustus had his own statue relegated to being one of several within its walls, or possibly set himself and Agrippa to the sides of the entrance door.

I personally believe Augustus went further: idolatry of the emperor whilst still alive had never been viewed as a positive thing by the Roman population, as Caesar’s tragic end demonstrated. Augustus undertook a great project of modernization of the city in line with its imperial standing and importance. Furthermore, he was an able politician and extremely able in propaganda. A conception of the Pantheon as a means of bringing the gods and heavens down to earth, and setting himself amongst them, would greatly strengthen imperial authority and power.

Emperor Hadrian who is responsible for having re-designed and rebuilt the Pantheon some 100 years later is known as a humanist and suggested by some as the architect of the building as we know it now. As can be seen from Hadrian’s villa at Tivoli, near Rome, Hadrian brought back much architectural experience gained in his years abroad. It is quite possible that he personally dictated the architectural principles by which he wanted the temple to be built. It is also quite possible that his interest for philosophy and knowledge may have led him to have the Pantheon built as a large scale planetarium although this is only conjecture. 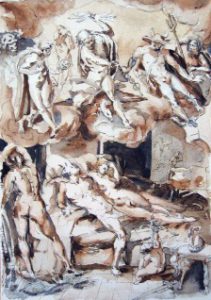 When Christianity became the official state religion, towards the end of the Empire, the Pantheon like all other pagan temples was closed to the public. It is possible that a first wave of damage was brought by the Christians themselves who on gaining the religious upper ground went about destroying offending altars. This is most evident in Mithraic altars which thanks to their being underground, often buried under the foundations of churches, have more recently been found and restored.

The Pantheon remained closed and abandoned for a couple of centuries to be sacked by rulers, thieves or barbarians who after the fall of Rome stripped it of everything which wasn’t nailed to the ground.