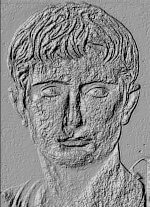 “Ancient Roman leaders” is a vast subject. Even in their own time, the Romans had a shifting definition of what might be considered a Roman leader:

The image to the left is from an 18th century French chronology of world history. It shows Latin kings followed by kings of Rome from its foundation in the year 753BC. The column to the right (“ans”) shows the number of years each of these ancient Roman leaders ruled.

If we really wanted to understand Roman leaders we would also have to consider Roman women: Women not only bore great influence on roman leadership and society but at times actually took an enormous share of power, such as Fulvia wife of Mark Anthony, Cleopatra (to whom Caesar erected a statue in the Forum), Agrippina who murdered her husband Claudius and was in turn murdered by her own son Nero.

The following page provides access to lists of ancient Roman leaders as well as making a brief effort at placing them in their historical context for those who have little knowledge of Roman history. A very good detailed summary of Roman leaders of all types and through the ages may be had from our timeline of ancient rome.

It is worthwhile to begin by remembering that the “Roman Empire” actually began as a kingdom in the 8th century BC and that after a few centuries and the expulsion of King Tarquin the Proud, Rome became a Republic.

Roughly around the year 0 Rome was becoming an Empire as Augustus nominated himself “Imperator” – a military commander title – after he defeated Marc Anthony and Cleopatra in a bloody civil war. The Empire eventually grew so large as to be unmanageable and was eventually split into two halves: west and east.

The western part eventually fell to a succession of barbarian invasions around the 8th century AD. The Roman empire of the east with capital at Constantinople held firm until the Renaissance when the Turks managed to breach its walls with modern cannons.

There are no contemporary written records of the earliest history of Rome and as a consequence, much that is known is due to myth and archeological findings. For example, frescoes in Etruscan tombs which happen to make reference to leaders and events of the time.

It therefore follows that the earliest figures are shrouded in mystery which the Romans themselves loved to elaborate on. A good example of this is how emperor Augustus had Virgil write the epic poem ‘Aeneid’ as part of his own propaganda and in so doing built on the legends of the early founding of Rome to promote himself and his successors as descending from the gods. This wasn’t an unknown political ploy of course as others before him, such as Julius Caesar had built on their own descendency from deities such as Venus and others. In fact, it didn’t take long before the emperors directly associated themselves to deities in themselves much in the manner of Eastern leaders.

Almost inevitably the success of ancient Roman leaders was linked to their ability to communicate with their people. Even today we may have something to learn about ancient rhetoric and how we can apply it’s magic to our own modern Social Media. For sure it gets applied on a regular basis by marketers and politicians alike.

We provide a more detailed yet succinct history of ancient Rome on a separate page. A general list of the most significant ancient Roman leaders including kings, consuls, dictators, and emperors follows…

Roman leaders from the end of the Republic and start of the Empire….

This is clearly not an exhaustive list at all. It hardly looks beyond the obvious. For example, it may be interesting to consider Saints Peter and Paul, Paul was a Roman citizen, both became powerful preachers (Roman leaders ?) of Christianity.

Read on for a conclusion on the subject of ancient Roman leaders, as well as a quick sketch of the influential Gracchi family who influenced some much of Rome’s military and political development.

We hope this was useful?
Please send us any questions and a quick happy/unhappy feedback. Thanks for visiting!