Ancient Roman bridges were an achievement in itself: As might be expected, the greatest difficulty when building a bridge across water is the construction of the supporting pillars rather than the arches which span across them. Unlike the construction of walls, the difficulty arises from the need to provide a solid foundation whilst facing the continuous force of the flowing water.

Ancient Roman bridges were an achievement in itself: As might be expected, the greatest difficulty when building a bridge across the water is the construction of the supporting pillars rather than the arches which span across them. Unlike the construction of walls, the difficulty arises from the need to provide a solid foundation whilst facing the continuous force of the flowing water.

These problems can be reduced to a degree by reducing the number of supporting pillars required which in itself depends on the ability to build strong arches capable of spanning greater distances.

The Roman architect Vitruvius tells us that in order to lay the foundations and supporting pillars the Romans would construct watertight vessels, rather like barrels. These were made of wood bound by metal. In order to provide water resistance, the barrels could be lined with pitch or clay. By lowering these into the river it was then possible to divert the water from the place of work in order to dig down to build foundations. The foundations could be lain directly onto hard rock if it was found, or onto wooden piles which were driven deep into the river bed. This last solution is relatively durable as is demonstrated by the result achieved in Venice! The wet mud and the lack of oxygen prevents the action of the bacteria which would in other cases destroy the wood.

Once the foundations had been laid the bottom portion of the pillar could be built within the “barrel” and from there brought up to the required height above the water level by means of scaffolding. As already described, the arches would be built by creating a truss to support the work until the arch had been spanned and was capable of supporting itself.

Clearly, this does not obviate the problems brought by the river’s continuous force on the pillars and bridge, particularly during periods of swelling when the force is greatest. In order to render the bridges durable the Romans would make the pillars lozenge-shaped, like Roman ships, so that on the attacking front they would part the water stream whilst on the back end they would prevent eddies which otherwise favour erosion of the foundations.

The top end of the pillars would flow into the arches and this provided the opportunity to leave some openings so that resistance should be as little as possible in the event that the river’s level should rise and threaten to topple the bridge.

The arches were generally semicircular. This means that the bridge gains a great deal of height, especially when it is attempting to span as great a distance as possible with a single arch. The result of this is that a number of bridges forced the road level above them to ramp up and down either side of the apex.

Wood, metal joinery, cement, volcanic rock, bricks, and marble. The Romans built their bridges out of a variety of building materials. The earliest Roman bridges were made of wood although clearly, this is less durable than stone or brick. Later bridges, or at least the ones which have survived the ages, were made either of stone or of mixed methods with stone foundations and brick upper sections. Stone would be preferably quarried locally, which in the Rome area meant using volcanic Tufa blocks. Bricks are generally easier to transport and shift to the work area. The more important bridges were often clad in marble, but this was clearly expensive as the function of the marble was purely decorative.

As with aqueducts we often see that the top of the supporting pillars has one or more collars, stone keys and holes to support the wooden or ceramic scaffolding and trusses employed for the construction of the pillar and arch above it. The stones would be laid to rest on the truss and in some cases might even be bound to each other with metal keys in order to prevent slip under heavy water pressure. Once the arch was complete the truss could be safely removed.

A look at some ancient Roman bridges

Much of this is visible in the Pons Fabricius (the Fabricius bridge) which still stands in full use in Rome connects the city’s Forum Boarium (cattle and finance market) to the Tiberine Island in the middle of the Tiber river. This bridge was built towards the end of the Republican period in 62BC, at about the time of Julius Caesar and the great orator Cicero. Each of the two arches spans some 75ft (25 meters). In this case, the ground level is close to that of the river itself so the supporting pillar is not high above the water level.

A Latin inscription above the arch, on both sides of the bridge, reminds us that it was built by Fabricius curator viarum (warden of roads) and that “idemque probavit” – he personally tested it. 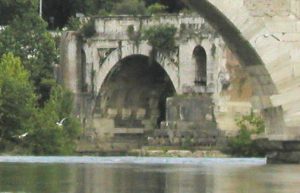 The other bridge well worth a look at is the broken bridge known as Ponte Rotto just after the Tiberine island. This was known as the Pons Aemilius and it was the first stone bridge across the Tiber. It was originally built in the second century BC but the strong river flow has knocked it over several times, the last of which was during the Renaissance. The pillars are ancient Roman whilst the arch is posterior. The opening in the upper part of the arch to reduce water resistance was obviously not so successful and the bridge is now a prop to one of the most romantic views of Rome.

A quick glimpse of the Milvian bridge is quite interesting, even because of its historical significance: It was here that Emperor Constantine the Great effectively became the last great emperor of Rome. It spans the Tiber slightly outside the ancient city walls. The stone version was built in 109BC to replace a wooden predecessor. The turret and arch at one end of the bridge are reminiscent of the triumphal arches which in some cases the Romans themselves would have at either end of important bridges, in this case, they were built much much later by the architect Valadier.

The version we see today is the result of numerous reconstructions and alterations through the ages and is a testimony of virtually all of Rome’s history. If these stones could talk!

The painting above is of Vulci castle and its ancient bridge to the north of Rome. In medieval times the castle acted as a toll point along the river. It is an exciting example of the single span bridge gaining height through a semicircular arch. In this case, the bridge not only spans an extremely steep-sided river gorge, but it also supported an aqueduct above it. The lack of maintenance of the aqueduct meant that lime stalactites formed through time and are still visible (little dark blob on the left of the arch in the painting). The aqueduct level finished collapsing in the 19th century. The road level of the bridge is paved with large stone slabs as any durable Roman road would be. Chariot wheel grooves are visible both on the road itself as well as on the walls.

Bridges for Military Use

Roman construction ability was amazing and one of the greatest engineering feats can be said to have been Julius Caesar’s bridge crossing the Rhine – see picture at the top of the page. The Rhine river is wide, deep and fast flowing (not to mention cold!). It was built from scratch in ten days. The following extract is copied directly from Julius Caesar’s Commentaries (an edition I found printed in 1732).

“For these reasons CÆSAR resolved to cross the Rhine, but he thought it neither safe to transport his army in ships nor agreeable to his character and the dignity of the Roman empire; wherefore though he found it very difficult to lay a bridge cross so broad, so deep and rapid a river, yet he resolved not to go into Germany any other way, and thus he contrived to do it.

Having joined two pieces of timber, a foot and a half square, by mortices that kept them at two foot distance from each other, he cut them to a convenient length for that part of the river he designed them for; then making them sharp at the end, caused them to be let down into the water by engines, and driven into the bottom with wooden mallets, not perpendicularly, but sloping, in compliance with the stream: directly opposite to these he placed two other stakes, joined just after the same manner and drove them into the ground forty foot distance from the other at the bottom, causing their tops to incline towards the stream, as the others had inclined from it.

These double stakes, thus fix’d, he jointed at the top by a cross beam of two foot square, fastened by two pegs, and tied with cords at either end, which prevented them from bending nearer one another, and made the work of so secure a nature, that the fierceness of the stream encreased the firmness of the bridge. Having observed the same method quite over the river, he covered the cross beams with planks and hurdles; then, having supported the arches of his bridge below with buttresses driven obliquely into the water, and fix’d at top to the main pillars, so as to sustain them against the force of the current: he likewise drove in other piles at a moderate distance above the bridge, to stave off trunks of trees, and such vessels as the enemy should send down the river to destroy the work.”

“From the time that materials began to be brought for the work, ’till the entire bridge was finished, was no more than ten days; when CÆSAR having left a strong garrison on both sides of the river, marched into the confines of the Sicambri: during this expedition embassadors came to him from most places thereabouts, to desire a peace, and court the alliance of the Romans, to whom he returned civil answers, demanding hostages for the fidelity”.

Roman materials included recycling of ceramic shards as a filler for cement or even as decorative mosaic.