Ancient Pompeii has become a site of international fame for the very particular drama which occurred during the golden age of the Roman Empire. Emperor Vespasian had died only a few months earlier and was replaced by his son Emperor Titus, who in only two years of power gained an everlasting reputation for generosity.

Ancient Pompeii has become a site of international fame for the very particular drama which occurred during the golden age of the Roman Empire. Emperor Vespasian had died only a few months earlier and was replaced by his son Emperor Titus, who in only two years of power gained an everlasting reputation for generosity. Part of this reputation was due to the instant aid he sent to the populations affected by the eruption. He appointed two ex-consuls to coordinate the relief effort and himself personally visited the disaster site on a couple of occasions.

The thought of an erupting volcano, with clouds of billowing black gas and dust, a rain of pumice stone and finally rivers of molten rock are fit for the best Hollywood drama and tragedy.

Having been discovered well over a century ago, Pompeii’s fame has been ensured by the vast range of artifacts which have been brought to light, many of which bear witness of a highly advanced civilisation. For example, complete sets of surgical instruments are in many ways similar to the instruments utilised by surgeons nowadays: The time-freeze brought about by the volcano’s lava has in a sense saved the city from the destruction of time which would have otherwise come about. (It is interesting to note that those parts of the city which have been dug up are now re-exposed to the waring effects of time).

The city of Herculaneum followed a similar fate and is perhaps a little well less known and has returned artifacts equal if not greater in quality to those of Pompeii.

Apart from the immeasurable art treasures and testimony of life during Roman times, ancient Pompeii has allowed us to study many other aspects of Romanity which would otherwise be impossible to study, for example the classification of Roman wall paintings into four styles is almost entirely based on what is to be found at Pompeii. As such we can see that the four levels of classification are actually based on a relatively small window of time.

Nowadays much of ancient Pompeii still lies underground, more than anything for its own protection. Part of it is actually built over and some has been pillaged by the famous “tombaroli” which the likes of Indiana Jones would be well acquainted with. Remembering that we are talking about an entire city, the simple maintenance and restoration of what has already been brought to light is greatly expensive and arduous, particularly when there is the constant presence of barbarians attempting to take away whatever they can.

These pages illustrate Pompeii with maps and images, give highlights of its significance within the fabric of Roman civilisation. We try to bring this Roman city to life by some comparison with the modern Western World. Pompeii may seem distant in time and space but actually it’s very very close to us in many ways.

What can be better than starting this introduction with the big bang which to this day is yielding surprises…. 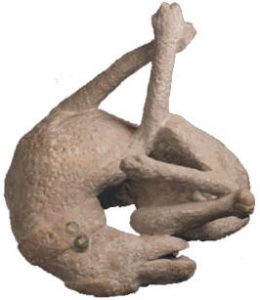 It is worth reading a letter written by Pliny the youger to his friend the historian Tacitus containing the earliest description of the eruption of mount vesuvius and the subsequent destruction of the surrounding urban centres. It is also the first description of what is now known as a “Plinian eruption”, the most destructive sort:

“The cloud was rising from a mountain, at such a distance we couldn’t tell which, but afterwards learned that it was Vesuvius. I can best describe its shape by likening it to a pine tree. It rose into the sky on a very long ‘trunk’ from which spread some ‘branches’. I imagine it had been raised by a sudden blast, which then weakened, leaving the cloud unsupported so that its own weight caused it to spread sideways. Sometimes it looked white, sometimes blotched and dirty, according to the amount of soil and ashes it carried with it.“

Common belief is that the inhabitants of ancient Pompeii died of a long agonising suffocation under Vesuvius’ volcanic ashes. But, recent research by the Vesuvius Observatory and Naples University suggests a different reality: The twisted bodies found as casts in the ash ie those twisted forms which many of us have seen presenting “cadaveric spasm“, were more likely the result of an instantaneous death. DNA analysis of bone tissues indicates that they were subjected to a sudden roasting, or rather, hit by a sudden brain-boiling wind at 300-600 degC depending on how close they were to the eruption.

This morbid scientific detail not only tells us what modern emergency services ought to look out for should it ever happen again, but it also heightens the sense of the immediate halt which came about in the area in 79AD. Incidentally it may also partly explain the good preservation of what was buried under the 6 meters of ash – not overly dissimilar to baking clay pots!

The well preserved bones have also allowed Archeologists and medical scientists to perform studies which have given insights into the population of the time, average height of individuals, some common pathologies and age distribution. By and large the surprising conclusion seems to be that the ancient Pompeian citizens suffered from the same incidence of obesity as we do in modern times (approx 10%), same average height to men and women now living in that region and perhaps most importantly, had a similar incidence of age related diseases and life span much longer than previously believed.

The city lay buried and forgotten until a couple of centuries ago treasure hunters began to dig it up with a vengeance. Much of what was buried by the volcano has been shored up and catalogued but a lot more has been dug up with little or no scientific method and since been dispersed, and sometimes recovered again. A couple of examples:

– Try googling “Boscoreale treasure” and look at some of the photographs: truly amazing. This treasure was found in a Roman farm, dug up and eventually sold to the Louvre.

– Recent researchers studying Pompeian botany were looking into proof as to when exactly the Lemon tree might have acclimatised in the region (see below why such a minor detail is of interest!) There are descriptions of its introduction and initially bad adaptation in Roman texts of the time. Archeologists found paintings and they found pollen but as to real lemons or lemon wood nothing was found….until a box was found stored away in Madrid Museum: donated a few centuries ago by the King of Naples to the King of Spain. It contained a pair of carbonised lemons from Pompeii.

Not far away the grapes and vines which were once grown in and around Pompeii have been genetically identified and since regrown, tendered and a wine produced, presumably similar to the “original” Pompeian wine.

Details such as these are gathered and put together with yet more discoveries. Plant analysis has enabled scientists to conclude that the temperature at Pompeii around the 1st century BC was approximately 2 degrees cooler than it is now. A study of pollen has enabled us to define which plant were present at the time of the eruption and to confirm that the peach tree had by then been acclimatised. The lemon too had long been a mystery which Pliny suggested was close but not quite acclimatised in spite of a number of attempts, however the testimony of frescoes as well as the discovery of pollen and indeed charred lemons would suggest success had at last been achieved.

These fragments can be put together not only to give colour but also build a broader picture of life in ancient Pompeii, its local economy and how the economy of such provincial towns evolved when placed in the context of the Roman empire’s economy, the Roman empire’s expansion and increasingly intense commerce, broadening trade-routes for example with Egypt and competition from the provinces such as Gaul.

Why study and visit Ancient Pompeii?

Our attention is attracted to Pompeii by the many details and treasures of daily life buried with Roman Pompeii, such as carbonised and fossilised bread, utensils of daily use found sitting on a table, doctors’ tools, rich paintings and much more which in many ways bring the city to life for us in ways which other archaeological finds cannot.

Nevertheless, to the uninitiated, visiting Pompeii can be like a tour around a building site, many of the treasures have been removed to a sterile museum leaving bare (broken) walls. All this makes it a little difficult to relate what is being seen with what the reality of the time was and more importantly still putting it in terms which might be understood today.

Some details are only striking when placed in comparison with the rest of civilisation of the time: A neat pavement for pedestrians, drainage systems, underfloor heating and other such details are so commonplace to us that we fail to see what a huge step civilisation of the time had managed. It is difficult to imagine a Pompeian villa in its full splendour by looking at bare walls and broken pillars and at the same time compare that to the wood and mud huts of other contemporary civilisations.

Why studying Pompeii is interesting:

Pompeii’s development, life, society and economy can be said to have been the consequence of four major factors:

The combination of these resulted in an provincial mid-sized city which relied on local agricultural produce and free international trade for its relative opulence.

Deeper analysis of the various aspects of Pompeian life require breaking it up into various sections on separate pages. Starting with a look at the position and geography of the city of Pompeii and the region – this was very much fundamental in Ancient Pompey’s birth and development as it influenced it’s contact with foreign lands, trade routes, influences from abroad and of course the fertility of the land and climate defined its economy and principal source of wealth: agriculture.

A look at the History of Pompeii’s development gives an idea of how Pompeii’s position played a significant role in the development of Pompeian society and social structure in a number of different ways such as intercultural mixing with other peoples, immigration, cultural influences, religion and of course politically in terms of its inclusion under the Roman umbrella.

We have made a quick attempt at a “compare and contrast” exercise of Ancient Roman Pompeii and modern society. It includes a provocative list of areas which may spark some argument. Certainly if we consider the last couple of centuries rather than “today” the similarities are much stronger. Feel free to write back with your own opinions!