Through these pages you can reach many different aspects of Ancient Rome. We have included as many of the salient features of >1000 years of ancient Roman history as possible and a good number of curiosities. 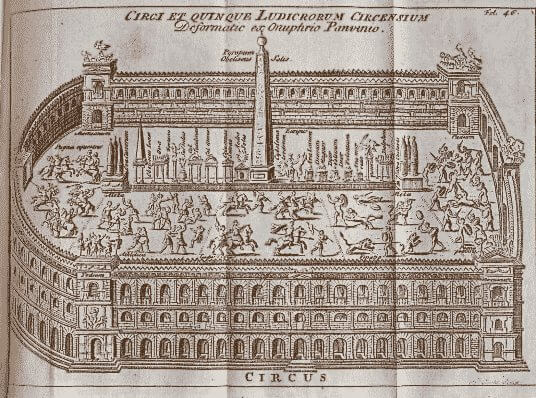 skip through time, emperors and leaders, events, art and  monuments which have marked the rise and fall of Ancient Rome.

A day at the Races in Ancient Rome’s Circus Maximus

Why not go to see the gladiators of ancient rome. Free tickets and food! (Well, they were free

Maps of ancient rome: have a look at ancient Rome, the city and geography of the empire both in new and antique formats.

Christian Persecutions. Read all about it! They got nasty.

The history of Ancient Rome lasted a full thousand years from its founding myths of Aeneas and Romulus & Remus all the way through its periods of greatness and infamy with men such as Caesar, Augustus and Nero.

Roman Chariot – Daily life in ancient Rome was in many ways similar to ours and in others quite surprising and exotic. Everyday shops, banks and trades functioned in the forums much as they would in today’s markets and the average roman would be quite shocked by public nudity just as we would today. Gambling although loved and frequently practiced was illegal except in particular circumstances: at the chariot races and at Christmas (the “Saturnalia” actually). Ancient_Rome_naval_gamesLike the Rome of today the traffic was unbearable, especially in the downtown Via Sacra (Sacred street, in the Forum) and the Soho area called the Suburra must have been quite something. roman_estruscan_walls The buildings and structures of ancient rome had little to envy of a modern city of today.

Even today buildings such as the Pantheon and the Colosseum continue to rank amongst the greatest architectural achievements.

Toga_servus On the other hand purchasing a slave or two to assist in the house, fields, shops or even work in your back yard as a prostitute was seen as quite acceptable – so long as you paid the taxes due! A slave-cook who knew his trade was worth his weight in gold and in fact things became so absurd that poor plebeians (roman citizens) might sell themselves and children into slavery in order to have a chance in life. Unwanted or unrecognized babies were often abandoned to be picked up by passers by.

The cruelty of the Colosseum is perhaps the epitome of how different the Romans of Ancient Rome could be from us. Although not all Romans were in agreement with the gratuitous slaughter of men and animals we can’t but be surprised at how a great civilization might turn death and slaughter into a mass spectacle. The population of ancient Rome, smartly dressed and seated according to social class, looked on to the arena from above and cheered.

Religion in ancient Rome was also surprisingly different from what we might regard as “religion” nowadays. The relationship between an ancient Roman and the gods was a little more business-like than the devotion a believer would have in God today. It was more like a contract at the forum: I sacrifice, follow ritual and pay respects and (in exchange) you might grant me this or that special favour, or at least not punish me.

In fact it was quite the norm to pay your respects and believe in a number of gods: In the household you had your house and family spirits called the Lares, whilst in public you could follow the public gods such as Jupiter and Co. What few people know is that theauthorities of ancient rome had little against anyone practicing whatever religion (or religions) they pleased. So long as it was done in private and didn’t go against public decency, such as the cult of Dionysus did, or go against the state itself, such as Christianity did.

At the beginning of the empire the ancient romans were quite different people from the austere warriors who had first founded the city and the republic. By the end of the empire the founding fathers of Rome were only a dim and distant memory.

A love for the luxuries of the Orient, barbarian pressure, a lack of new territorial conquests and a faltering supply of slaves brought inevitable economic hardships. Ancient Rome succumbed to cardiac arrest in the year 473AD under the weight of repeated barbarian invasions and a flagging economy.

Ancient Rome had become its own worst enemy and the invading barbarians minted coinage with the words “Invicta Roma” -Rome unconquered- as if they were there to save it from itself and bring back its ancient valour.  That inheritance was also claimed by many others, such as Charlemagne, Karl der Grosser, founder of the “Holy Roman Empire”.

The Holy Roman Empire had little to do with ancient Rome but it did perpetuate its  inheritance of Christian belief and certain notions of law & government (I’m not sure about popular freedom though). The inspiration of the ideal and “eternal city” of Rome led by great men such as Caesar became a holy empire led by a Kaiser.

Emperor-Gods of Ancient Rome all legitimated by an auspicious Papal blessing, in Rome, on Christmas day of the year 800AD. The Holy Roman Empire carried the flame of ancient rome through to the nineteenth century.

And then we should not forget the other great inheritance of ancient Rome, often forgotten but so fundamental to the West: “New Rome“. When the empire was falling under the weight of its own size and venerable age it was split in halfso that it might be governed more easily. Emperor Constantine founded a new capital for the eastern half which he called Constantinople also known as “New Rome” and now better known as Istanbul.

In spite of the fall of the Roman empire of the West and the internal struggles of the Middle Ages, the Roman empire of the East, headed by New Rome, fought on and survived into the Renaissance. It fell in 1453 after the greed of the Venetians, the might of the Turks and modern cannon technology managed to breach its hitherto impregnable walls. Emperor Constantine’s foresight in any case lasted long enough to provide that bulwark of defense against the East which allowed the West of today to rise from the ashes like a phoenix.

And what of Ancient Rome? For a while the buildings were subjected to pillaging of materials or simply abandoned. A few temples were transformed into churches

and hence survived through the ages. The bureaucracy of the Roman Catholic Church took over running of the city and of “St. Peter’s Patrimony”. Then came the illuminated conservationists of the Renaissance and the Romantic artists of the Grand Tour. The Pope or “Pontifex Maximus” lives on as do many of the notions of law the majestic monuments, structures, aqueducts, basilicas and roads of ancient Rome. The rest is history.