This picture is also very interesting because of the priest on the left of the image holding a curved staff and divining the future through the flight of birds (ducks in this case). The Romans inherited this practice from the Etruscans, who were always considered the masters of this art.
Boxers and an augur 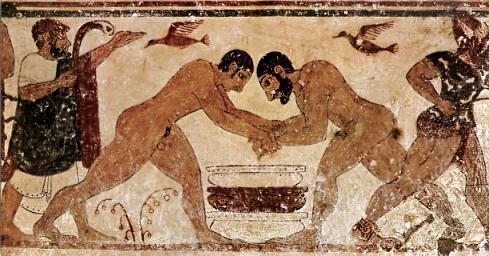 This painting is from the burials at Tarquinia where a large number of Etruscan frescoed tombs have been found and opened to the public. The ancient Etruscans are known for having passed on to the ancient Romans the concept and love of gladiatorial combat, boxing and wrestling as entertainment

and called the religious order the Aruspices. Romulus, founder of Rome was a particularly gifted diviner of this sort and the very founding of Rome was mythically linked to the flight of Vultures.