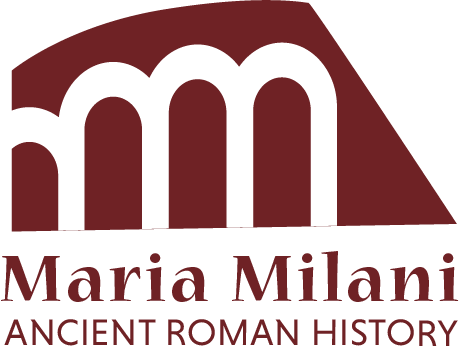 This print of a triumphal parade in Rome is taken from “The Antiquities of Rome” printed in 1731.The image shows an ancient Roman triumphal parade and the various characters forming part of it, with the signs of power (the fasces) and trumpeters leading the way, followed by the images of the cities taken, the war booty and prisoners of note and then by the glorious general followed by his troops.

An ancient Roman triumph parade through a triumphal arch like the arch of Constantine (this thumbnail is a section!) Several triumphal arches pictures are shown further below. 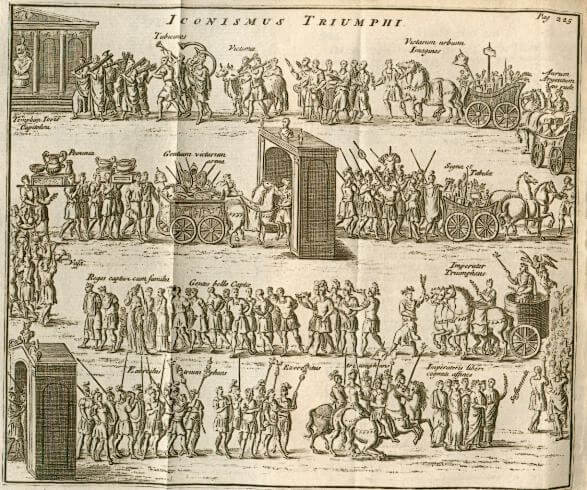 The image also shows the essential landmarks of the parade: At the bottom left of the image we have an entrance gate to the city, possibly the Porta Triumphalis (the via Trionfale still exists today of course…) which may be seen on the antique map of ancient Rome, followed by the Triumphal arch which would have been somewhere along the via Sacra in the Forum and eventually up to the temple of Jupiter Optimus Maximus on the Capitoline hill.

Arches of this kind are an invention of Roman architecture which eventually made its way indoors within Christian era basilicas. There are a number of examples, amongst which is the Arch of Constantine by the Colosseum and the Arch of Septimus Severus in the Roman Forum.